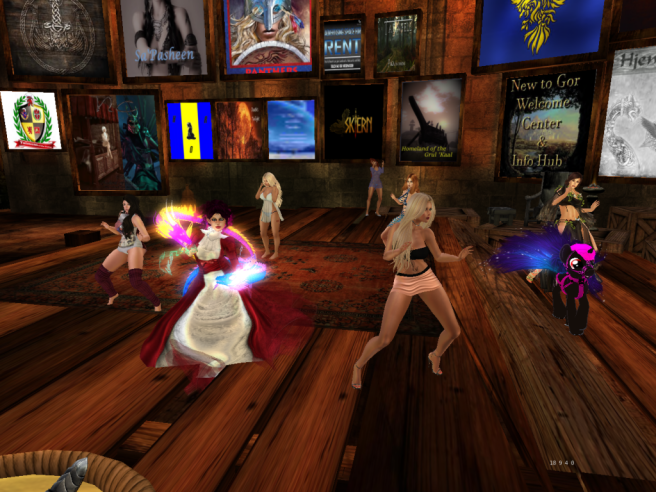 Dressed as a freewoman in red and white, with my dragons, Doré and Bleu, and firelizard, Falmia, I started with a song.  I had spent about twenty minutes of the last hour before conditioning with a “calm” binaural to mostly stop my shaking.  Then my voice over happened.  I was shaking like a leaf again.  I lowered the background levels, I muted my broadcaster, so I wouldn’t hear my own voice, which _always_ throws me off, and I took a deep breathe in and hit the button.

“Ici radio fouet!” I started.  Everywhere else I start with “Ici radio Mooncheeks” (this is Mooncheeks radio), but that wasn’t right for the Gorean Whip.  I had checked and “fouet” means “whip.”  So, what I’m trying to say is “this is Whip radio.”

Those initial words done and over with, and I went into my spheel.  Who I am.  That I’m new here to the Gorean Whip.  That this is my first time on the air with the Whip, and what song I’m playing next.  Then I let the button go, and did my dj magic, and let the broadcaster do its thing.

Unity showed up and the calm that passed over me set me up for the rest of the set.  3 and a half hours of (mostly) Canadian music.  Rejara, Penalt, and others showed up.   Some of Irish’s posse showed.

At some point, I decided to get changed out of the freewoman garb, because it was confining me.  I switched to one of the outfits I love wearing.

That’s when I let er rip!  That’s Unity in the foreground.  Irish in the red leg warmers, and I still have my dragons with me.  I love those dragons!

Irish Breen: and I am just jammin away. You all IO rocks. Just saying we have the BEST damn DJ’s and broacasters on the grid!!!!
io мooncнeeĸѕ: Still going strong here!
Irish Breen: Dj IO RAWKS you all!!!!!

Irish Breen: IO you rawk and I am so glad your here, thank you for your application, you are a huge asset

This is from someone who has been broadcasting on the Whip forever.  I was told that the managers of the Gor Hub loved me being there.  And that I should have applied to work there almost a year ago.

Except… a year ago… I was being emotionally strangled by a man who is now blaming everyone but himself for the stuff going wrong in his life.  Ten months ago, I fell on a slippery dock and nearly broke my back in three places, and the man I thought loved me from a distance, didn’t seem to care about me anymore.  I was dying inside and was nearly snuffed out.  I could barely sit up, or breathe, and somehow, I muddle through, and Spitfire was there as a shoulder the entire time, never judging, never forcing me to come to them, but always there for me when she was online.  Always a happy presence.  Always there with a smile.

I’m glad I’m no longer that one’s girl.  I’m Spitfire’s.  And Unity’s.  “Their child,” said Unity once to me.  Reforming me.  Remaking me.  Making me stronger.  In my mind maybe.  I hope my body joins in with the healing they’ve been having and doing.  Their combination of keeping my ember burning until Unity could supercharge it to a flame, has brought me back.

I still fight the void.  There are days when the pain is too much.