Sooo… I promised my kids a set of minecraft accounts.  My original account has been permanently appropriated by one of my kids, my second one by another kid, and the third had his own account.  So, that meant hubby and I needed accounts again.

Then I went and got a realm.

“I’m in a minecraft coma.” I told Spitfire.

Then the comments from the rest of the peeps in a very private discord channel agreed with me.  Minecraft Gaming Comas were something to enjoy.

I described how, when I was younger, I loved going for long walks.  If I had been officially diagnosed as autistic then, this would be the “wandering” autistic children are known for.  I can remember walking out the door at 5 and not coming back home till I was hungry, walking for miles and miles.  This was, of course, before Canada went metric happy.  When I was stateside, I was happiest on the move.

Even now, I want to wander, but broken toes, lack of adequate footwear, and pain, stop me.  A congenital hip defect, car accidents (as passenger and pedestrian) and falls have slowed down my walk to about half of what my walking speed was, but I can still keep going with my cane.  Add my favorite backpack and I could walk away from anything, even if it hurts.

In Minecraft, pain doesn’t exist.  I can wander all over a map on minecraft for hours, and I’m happy.  I can spend hours mining and building and more, and I’m happy.  I’m in my zen almost as easily as I slip into it when I knit.  It doesn’t matter if I’m the only one on the map either.  It’s a joy to me, and I explained that to Spitfire.

She hemmed and hawed and had her 50th real life birthday, and I failed as her girl by not sending her a present, even though I made multiple sets all about her, or at least had something about her in it.

Yes, for birthday or rezday sets, I sing the birthday dirge.  I have had people cry because _someone_ sang a birthday song just for them.  It’s my pleasure to try to do something special for people, because birthdays and rezdays should be special.

So, I promised to buy her a minecraft account when we got payed next.

The silly gynoid jumped the gun.

“What have I done?” she lamented. “This is a timesuck!”  She went on to explain that if she played on minecraft, she couldn’t be on Second Life, and was worried that it would affect her job performance.  She works from home and needs to concentrate on her job success, not on a game, no matter how fun it is.

I rolled my eyes.  If she had choice to go on voice with me, I could have taught her some basics pretty quick.  So, for a week, she bashed single player, then rejoined us in my realm.  She has a cute little shack and is punching her way through to a mine that I have been raiding.  I’ve found a raveen and have been pilfering it for all the wood and rails and more it has.  I also set up a rail from my little hobbit hole to the kids’ towers. 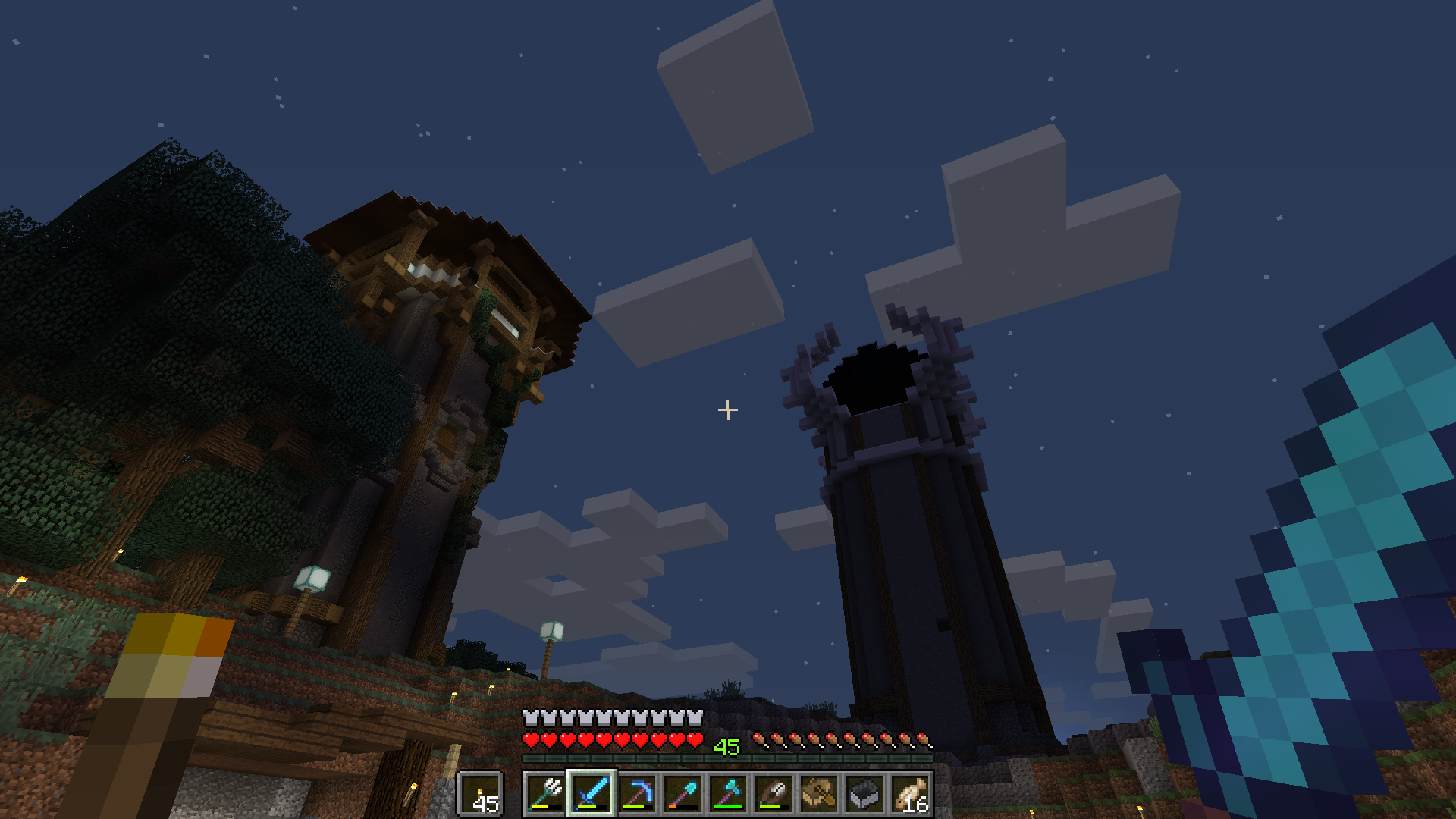 My kids have found “how to build” guides and two of them made towers.  *facepalm*  Yes, we’re using a 1.13 map, and, between raiding the mine, I’m off on walkabouts, finding buried treasure and pirate ships and more.  I have a helm that lets me go an extra 10 seconds of air time, so I’m having fun killing stuff in the water.  The drowned zombies can’t dump the boats.

I think Spitfire is having fun on her own too.  It’s peaceful, mostly.  But don’t mine at night.